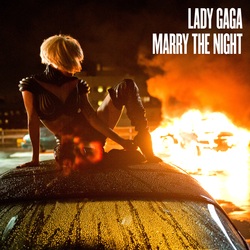 "Marry the Night" is a song by American recording artist Lady Gaga. It was released as the fifth and final single from her second studio album, Born This Way (2011). The song was written and produced by Lady Gaga and Fernando Garibay, and was recorded on the tour bus during The Monster Ball Tour with Garibay. Revealed in February 2011, the song was inspired by the energy of Gaga's previous song "Dance in the Dark" and the love for her hometown, New York City. The song was released for promotion on Farmville, six days before the release of Born This Way.

"Marry the Night" is a dance-pop song influenced by electro rock and house. The track features electronic church bells, a driving electro organ sound, techno beats and a funk rock influenced breakdown. The lyrics are a tribute to Gaga's love of the nightlife and partying, while serving as a homage to her hometown.