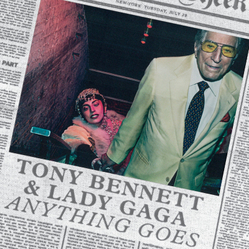 American singers Tony Bennett and Lady Gaga had announced a collaborative jazz album release, titled Cheek to Cheek, in 2014. Although the project was in development and discussions were taking place as early as September of 2012, the recording did not start until the Spring of 2013, being delayed by Gaga's hip surgery and cancellation of her Born This Way Ball tour. The recording took place over a year in New York City, and featured jazz musicians associated with both artists. Bennett's quartet was present, including Mike Renzi, Gray Sargent, Harold Jones and Marshall Wood as well as pianist Tom Lanier. Along with Evans, jazz trumpeter Brian Newman, a long-time friend and colleague of Gaga, played on the album with his New York City based jazz quintet. Tenor saxophonist Joe Lovano and flautist Paul Horn were also enlisted as musicians. The songs were handpicked by Bennett and Gaga; they selected tracks from theGreat American Songbook including "Anything Goes", "It Don't Mean a Thing (If It Ain't Got That Swing)", "Sophisticated Lady", "Lush Life", and the title track, "Cheek to Cheek".

Bennett had initially covered "Anything Goes" for his seventh studio album, Strike Up the Band (1959) and Gaga first came to know of it when she was 13 years old. Gaga thought that "Anything Goes" was a funny track with a "real sexy, powerful vibe to it, and it's just because we're having fun singing it." The version on Cheek to Cheek finds Gaga and Bennett swapping the lyrics between themselves, and was described by Bobby Olivier, from The Star-Ledger, as "smooth as silk". The syllables are pronounced strongly by Gaga in syncopation while her vibrato complimented Bennett's characteristic jazz vocals and swing. Olivier added, "Gaga's voice, when stripped of its bells and whistles, showcases a timelessness that lends itself well to the genre." Instrumentation for the song comes from horns, cymbals and saxophones.