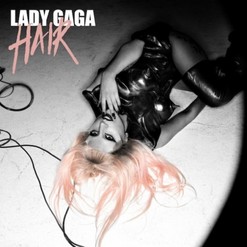 "Hair" is a song recorded by American singer Lady Gaga for her second studio album, Born This Way(2011). Written and produced by Gaga and RedOne, "Hair" was released worldwide digitally on May 16, 2011, as a promotional single from the album, as part of the iTunes Store's "Countdown to Born This Way" release. This was after the previous promotional release, "The Edge of Glory", was made the third single from the album. Nevertheless, Gaga explained that "Hair" was not planned to be a single, but may be released as one if it sells well at the iTunes Store, like "The Edge of Glory".

According to Lady Gaga, the melody of "Hair" resembles the work of metal bands Kiss and Iron Maiden, and is also influenced by Bruce Springsteen. The song is an uptempo club record inspired by Gaga's experience as a teenager, when her parents forced her to dress in a certain way. Gaga found that the only way to express herself was through her hair, and she described it as a song about liberation and her ability to change her ways. The lyrics talk about embracing one's hairstyle as their ultimate expression of freedom. "Hair" was recorded while Gaga was on tour with The Monster Ball throughout Europe. The song features a saxophone solo performed by saxophonist Clarence Clemons, a prominent member of The E Street Band. She personally wanted Clemons to play saxophone on the song, which he did by recording his part at a Manhattan studio at midnight, after he had just flown there from his home in Florida.

Note: This was given out exclusively by the Thai promoter of the Born This Way Ball in Bangkok.