Do What U Want 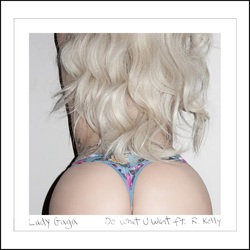 "Do What U Want" is a song by American singer Lady Gaga, featuring R&B performer R. Kelly. The song was released to digital outlets on October 21, 2013 as the second single from her third studio album, Artpop (2013). The singers share songwriting credits with Paul "DJ White Shadow" Blair, Martin Bresso, and William Grigahcine. Blair first presented Gaga with the song's initial concept two years prior. The pair completed production on the song in 2013, after which Kelly's vocals were added. A snippet of "Do What U Want" premiered in a Best Buy/Beats commercial on October 17. Fan interest and warm critical reception led to its release as the album's second single.

Sonically, "Do What U Want" is a synthpop and R&B track containing 1980s throbbing synths laid over an electronic beat. The song's lyrics represent themes of sexual submissiveness, with Gaga telling off detractors that her thoughts, dreams, and feelings are her own, no matter what one does with her body. The artwork for "Do What U Want" was shot by Terry Richardson and features a rear view of the singer wearing a floral thong. An accompanying music video for the song was filmed by Richardson and was to be released through BitTorrent in December 2013, but was cancelled due to unknown circumstances. Critics praised the song's simplicity, its 1980s-inspired production and wide-range commercial appeal. Some compared Gaga's vocals to those of Tina Turner.