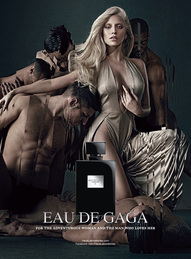 Eau de Gaga is the second fragrance by American singer Lady Gaga. The announcement and details of the fragrance were announced on her Haus Laboratories website. The fragrance's notes include white violet, lime, and leather, and it is marketed as being suitable for both men and women.

In August 2014, through social networks, Gaga announced that her second fragrance by Haus Laboratories in association with Coty, Inc. was named Eau de Gaga. She also revealed the first promotional image from the photo shoot of her along with many men which represents how the fragrance can be worn by both genders. The advertising campaign was directed and photographed by Steven Klein, who worked with her first fragrance, Fame. It was first released in September in France, Poland, Germany, U.K., Spain and other countries of Europe. In Asia, Pacific, Russia, Canada and also some countries in Europe is set to be available in November. In the USA, Eau de Gaga will land at retail on January 15, 2015.

The Eau de Gaga's bottle is black and meant to simulate both masculine and feminine aesthetics and comes in a rectangular red box. The front of the box reads "Eau de Gaga: Paris New York 001". The 001 is referring to this fragrance being the first out of the entire collection, which is still to be continued. There is also a body lotion and shower gel which is sold separately from the fragrance. The bottles for both the body lotion and shower gel are slim and both have the same box design as the fragrance. The fragrance is available in 15ml, 30ml, 50ml, and 75 ml. Both the body lotion and the shower gel are available in 75ml and 200ml.